The U.S. Poultry & Egg Association (USPOULTRY) awarded the 2022 Clean Water Award to Tyson Foods in Dardanelle, Ark., and Pilgrim’s in Arcadia, Wis. The award is presented annually to poultry facilities that go above and beyond in their commitment to sustainable wastewater treatment and water reuse. The winners were chosen by a committee of industry engineers, university personnel and industry media. An announcement of the recognition of the Clean Water Award recipients was made during USPOULTRY’s Environmental Management Seminar.

Award recipients were recognized in two categories, full treatment and pretreatment. The full treatment category encompasses plants that treat wastewater in accordance with an individual National Pollutant Discharge Elimination System permit that allows the facility to discharge into a receiving stream or final land application system. The pretreatment category includes facilities that discharge pretreated effluent to a publicly owned, full treatment facility for further treatment. To be eligible, a facility must have a minimum of two years of no significant non-compliances or notices of violations or any other type of enforcement action.

Tyson Foods was selected the winner in the full treatment category for its broiler processing plant in Dardanelle, Ark. The complex generates an average wastewater flow of 1 million gallons per day and processes around 294,000 broilers per day. Dardanelle’s wastewater treatment process consists of 2-stage screening and equalization, biological treatment and disinfection before it discharges directly into the Arkansas River. This facility consistently removes 99% of total suspended solids, biological oxygen demand (BOD), and oil and grease from the wastewater. This high level of treatment allows the facility to reuse approximately 27 million gallons of treated water annually in numerous non-contact processes. In addition to efficient wastewater treatment, the Dardanelle facility has implemented a recycling culture that has allowed them to offset hundreds of tons of waste from being sent to  landfills.

Pilgrim’s was selected as the winner in the pretreatment category for its broiler processing plant in Arcadia, Wis. The Pilgrim’s Arcadia wastewater treatment plant generates roughly 1 million gallons per day of wastewater and processes approximately 200,000 birds per day. The Pilgrim’s Arcadia wastewater treatment facility pretreats an average flow of 1 million gallons per day. Wastewater generated in the harvest facility is first screened to remove feathers and larger byproducts. Further treatment is accomplished in a dissolved air flotation unit (DAF) that analyzes and automatically adjusts chemical dosage into the DAF to maintain a consistent, high-level of pollutant removal. Pilgrim’s Arcadia has also partnered with a third-party to receive specific operational trainings on the equipment used, so team members can effectively reduce the water used throughout the facility. This led the Pilgrim’s Arcadia facility to develop a water conservation team to help them achieve their goal of reducing their water intensity by 15% by 2030. Team members have also participated in multiple events throughout the community to restore natural buffers along creeks and streams. These efforts have been instrumental in reducing erosion along stream backs, which have led to a subsequent reduction of phosphorus levels in the same waterways.

“We received numerous exceptional  applications for this year’s Clean Water Awards, and they should all be commended. Each facility that submitted an application operated for no less than two years without a noncompliance issue, which is highly notable,” said Mike Levengood, Perdue Farms, and USPOULTRY chairman. “The quality of the applications received is representative of our members’ unwavering commitment to wastewater treatment and the conservation of our earth’s natural resources. Congratulations to this year’s winners.” 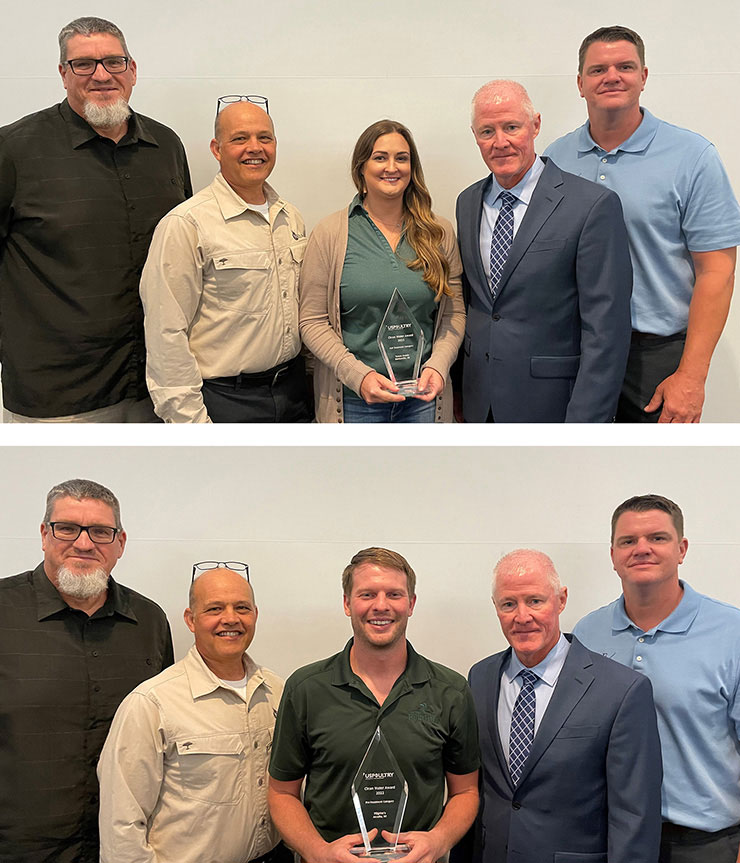 USPOULTRY and the USPOULTRY Foundation announce the completion of a funded research project at the University of Georgia in which researchers assessed automated tracking of laying hens in cage-fr...

Having a secure data system is a crucial component of a poultry company’s operations. USPOULTRY is sponsoring a new Cyber Security and Risk Management Summit that will provide a broad overview of...

USPOULTRY and the USPOULTRY Foundation are accepting research pre-proposals from colleges, universities and research facilities through Nov. 1, addressing reduced hatchability in broiler bree...